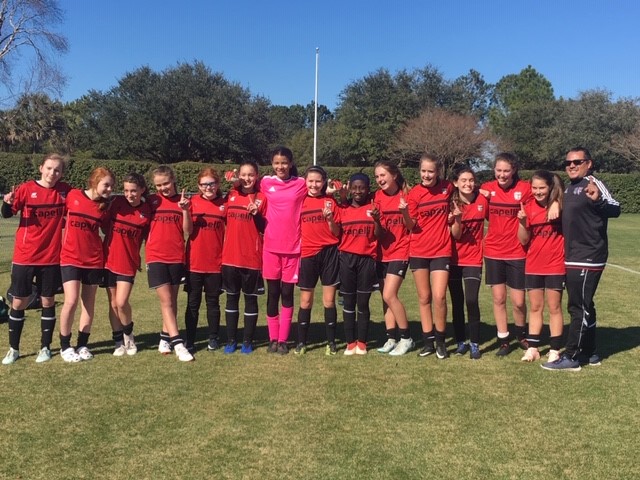 The Coast FA 04g Red team coached by Mark Sanchez finished off a prolonged 2018 season by winning the U15 PMSL Classic State Cup on Saturday in Daniel Island, S.C. The victory came in dramatic fashion winning the cup on kicks from the mark after completing eighty minutes of regulation time plus twenty minutes of overtime. DISA drew first blood with an early first half goal but the Coast girls equalized in the second half to force overtime and eventually win in sudden death PK’s. “ I am so proud of my girls. Yesterday’s win was a testament of our season where we played as a unit with heart and desire. It took everything they had and they were willing to give it in order to win the state championship. This is a memory that will last a lifetime and now we can look forward to regionals “ said Coach Sanchez. Along with the state championship result comes a trip to Frisco ,Texas this summer to represent South Carolina in the Southern Regionals where they will face state champions from other southeastern states. The team will also receive a promotion from the PMSL Classic league to the SCSCL Challenge league next season where the competition level will be very high. Good stuff ladies !

Coach Joel Banta’s Coast 02 Red team came up one victory short of winning the U17 SCSCL Challenge State Cup on Saturday in Mount Pleasant S.C. After a resounding 6-1 victory in the semi final versus SCUFC the boys came out on the wrong end of a 3-1 championship result. The boys pulled one back after falling behind 0-2 to USAMP and made a furious push for the equalizer in the final ten minutes. Pushing attackers forward created a vulnerable defensive position and they conceded a third goal. Coach Banta was disappointed after the result but summed up the season by saying “ The team had a very successful year but just came up a little short in the final. I am super proud of the way these boys competed all year.” By finishing in the top two, the Coast 02 Red will maintain its position in the highest level of SCYSA youth soccer ( Piedmont Premier League ) next season. Well done boys !

The U18 Girls SCSCL Challenge State Cup was played Sunday in Rock Hill, S.C. and saw the Coast 01Girls drop a 0-6 result to the DSC 01 Lady Gold Premier. Despite the disappointing loss the Coast 01 Girls enjoyed a terrific season in the SCSCL Challenge league and will also be promoted to the Piedmont Region League next season where the competition will be fierce. “ This was supposed to be a rebuilding season for our team but the girls chemistry grew quickly. It soon became apparent that we had the makings of a team that could put together a good season. I am extremely proud of the girls for making it to the State Cup finals as a #6 seed entering the tournament. I am really looking forward to next season “ said Coach Bass.